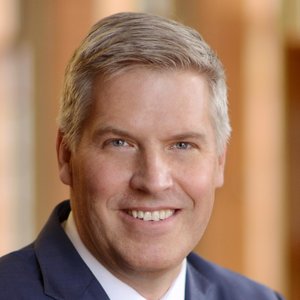 As the University of Pittsburgh’s 18th chancellor, Patrick Gallagher directs one of the nation’s premier public institutions for higher education and research. In this role, Gallagher oversees a community of more than 33,000 students at five distinct campuses. He also supports the work of more than 14,000 faculty and staff members.

Under his leadership, Pitt has strengthened its status, being named a top public school in the nation by U.S. News & World Report.

Prior to his installation at Pitt, Gallagher spent more than two decades in public service. In 2009, the president appointed him to direct the National Institute of Standards and Technology. While in this role, Gallagher also served as acting deputy secretary of commerce before leaving for Pitt in the summer of 2014.

Gallagher holds a Ph.D. in physics from Pitt and a bachelor’s degree in physics and philosophy from Benedictine College in Kansas.