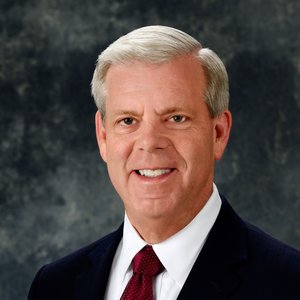 Selected as the seventh chancellor of the Dallas County Community College District, Dr. Joe May assumed his duties leading the seven-college, 165,000-student system in late February 2014. To better serve students, Dr. May led the consolidation of the seven colleges into one singly accredited institution called Dallas College in June 2020.

Throughout his career, May has expanded opportunities for students who want to pursue a bachelor’s degree by starting at a community college. At the same time, he brings a strong commitment to improve the Dallas economy by helping to grow middle-class jobs. He is known both nationally and internationally as a result of his relentless advocacy of the role of community colleges in solving today’s most challenging social issues.

As the first member of his family to attend college, the chancellor realized the profound impact that higher education had not only on his life but also on society in general. This background inspired May to help start and then become the founding president of Rebuilding America’s Middle Class (RAMC), a national consortium of community colleges which is dedicated to ensuring that everyone has the opportunity to pursue the “American dream.”

As a community leader and educator, May strongly believes in achieving academic excellence and has worked closely with public school districts, sponsored charter schools, career academies and early college programs. May was instrumental in expanding Early College High Schools in North Texas and in bringing Pathways to Technology (P-Tech) high schools to Texas.

May previously served as president of the Louisiana Community and Technical College System; president for the Colorado Community College System and president of Pueblo Community College before he accepted the system’s CEO position. Respected throughout the world, May has provided consulting services to new community college initiatives in Japan, the United Kingdom, Russia and Saudi Arabia. He also served in leadership roles at Sul Ross State University in Alpine, Texas; Navarro College in Corsicana, Texas and Vernon College in Vernon, Texas.

A native of East Texas, May earned his Doctorate in Education from Texas A&amp;M-Commerce. He also holds Master of Education and Bachelor of Science degrees from Stephen F. Austin State University in Nacogdoches, Texas.

May has been married for 44 years to his wife, Jeanne. They have two children and three grandchildren.

Dr. May started his higher education career in 1978 as an adjunct faculty member at Cedar Valley College in the Dallas County Community College District. Those initial experiences were the foundation for his strong belief that the role of community colleges is the solution for the greatest challenges facing individuals, employers and communities.