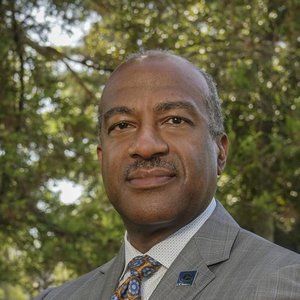 Gary S. May is the seventh chancellor of UC Davis, one of the nation’s most academically and socially diverse universities.

Chancellor May came to UC Davis in 2017 after serving as dean of Georgia Tech’s College of Engineering. In 2015, President Obama honored him with the Presidential Award for Excellence in STEM Mentoring.

May earned his master’s and Ph.D. degrees in electrical engineering and computer science at UC Berkeley. He has won numerous awards for his research in computer-aided manufacturing of integrated circuits. In September 2018, May was inducted to the National Academy of Engineering.

A prominent voice in higher education, May is a Commissioner of the national Council on Competitiveness. He serves as Vice Chair of the Universities Research Association’ Council of Presidents and is on the executive committee of the Association of Public and Land-Grant Universities Board of Directors.