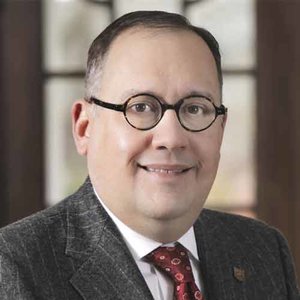 Andrew D. Martin was appointed Washington University’s 15th chancellor by the university’s Board of Trustees on July 14, 2018. He previously served as dean of the College of Literature, Science, and the Arts at the University of Michigan from 2014-2018, and in various positions at Washington University, including as the Charles Nagel Chair of Constitutional Law and Political Science at the School of Law, vice dean of the School of Law, founding director of the Center for Empirical Research in the Law, and chair of the Department of Political Science in Arts & Sciences. Along with numerous scholarly articles and book chapters, Martin is the author of “An Introduction to Empirical Legal Research,” which he co-authored with Lee Epstein, the Ethan A.H. Shepley Distinguished University Professor at Washington University, and “Judicial Decision-Making: A Coursebook,” co-authored with Barry Friedman et al. Martin earned his doctorate in political science from Washington University in 1998 and his A.B. from the College of William & Mary in mathematics and government in 1994.